Email ThisBlogThis!Share to TwitterShare to FacebookShare to Pinterest
Labels: showreel

Email ThisBlogThis!Share to TwitterShare to FacebookShare to Pinterest
Labels: Major Project, The Jellyfish and the Hermit Crab

Here is what I have been working on this week, from sound and animation to editing.
I hit a few problems at the beginning of the last week while animating faces in Adobe Animate, as the video changed the sequence timing so all of the faces were out of sync. I fixed it eventually and finished this, and to apply the whole sequence to my animation I colour keyed it and set it to 'hard light'. This is so that the faces were not too black and out of place on the video.
I also have been working with Jeffrey again and updated the sound. For the music and sound, the Jellyfish and Crab have two different sound themes, the jellyfish has woodwind sounds like clarinets and flutes, and the crab has sounds of glockenspiels and bells, to go with the nighttime setting. The music was designed so that when the two meet and share a scene, the woodwind elements combine with the twinkling of the bells and compliment each other, much like the Jellyfish and Crab.
Other elements of sound were the fish swimming around the pool, every time they are on screen they are accompanied by a layered wooden chiming noise.
Other effects I added to the animation were the electricity zaps from the jellyfish, as it was an important part of the story. This was easy to animate and I loved the way it looks, just using the lightning animator in After Effects. 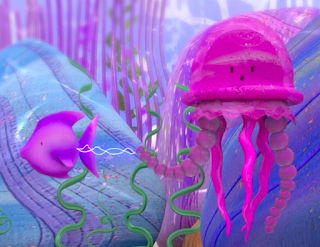 After getting feedback on my final version of the animation, I had feedback to add other sound effects such as the electric noise of the jellyfish tentacles and also the water swishing as the jellyfish moves. This was easy to do and managed to finish it.
Some more feedback that I got was to cover up a divide in the animation with a bubble transition, but instead I went back into Maya and rendered out some fish swimming past, so I added that over the top and put a CC camera blur on top.
I also added a camera wobble over the whole animation in After effects. This works really well and makes the animation more fluid and less static, and makes it seems as if the camera is floating about.

Email ThisBlogThis!Share to TwitterShare to FacebookShare to Pinterest
Labels: Major Project, The Jellyfish and the Hermit Crab

Here's a sample of the almost finished music, composed by Jeffrey Wang.
Below is the music with the voiceover on top by Bob Kingsley. Towards the end I need to turn down the volume of the music behind the voiceover.